There isn’t a single road in the whole Britain as impressive as the one that takes you from the A986 to Applecross through the Bealach na Bà. The feeling of an alpine road, with its hairpin bends, plus the stunning views of the Wester Ross and the isles of the Inner Hebrides.

The Applecross peninsula is a viking axe blade shaped piece of land that looks westwards from the mainland towards Rassay and the isle of Skye in the historic county of Wester Ross. Its remoteness and unspoiled character is still an essential attractive of an area of stunning natural beauty and distinctive history.

The name of Applecross has nothing to do with apples or crosses, although the benign climate of most of the west coast of the Highlands uses to remind me the apples of Summerisle, the pagan island from the 1973 cult film, The Wicker Man. Applecross is the anglicisation of the Pictish name the area had when the Irish monk Maelrubha arrived to its shores in the seventh century and founded a monastery: Aporcrossan, ‘confluence of the river Crossan’ or, in modern Gaelic, Obar Crosain.

Our drive began at Lochcarron, a sea loch whose coastal villages have become a famous holiday destination in the Highlands. The A890 goes along the edge of the loch in parallel to the railroad of the Kyle-Dingwall line. We headed towards Kishorn and then took the A986 towards Shieldaig. This road can be considered the neck of the peninsula -everything on your right being Applecross- and, after Shieldaig, turns east towards the torridonian mountains and, through Kinlochewe, the Wester Ross ring.

Just leaving Kishorn we had a gorgeous view of the Sgurr a’ Chaorachain, a Corbett with 2,598 feet (792 metres). Following the road, is visible the Beinn Bhàn, another Corbett of 2,940 feet I hope I will be fit to climb some day. From the car, we could appreciate the rocky corries of the easter side of the mountain, a paradise for scramblers.

About three miles after Kishorn, we found on the left the exit to the village of Applecross through the Bealach na Bà. The huge sign that pretends to discourage learner drivers and owners of large vehicles sounds intimidating, but it can also become an incentive. (By the way, the alternative detour route takes 37 miles and not 7, as the half-erased sign suggests.) 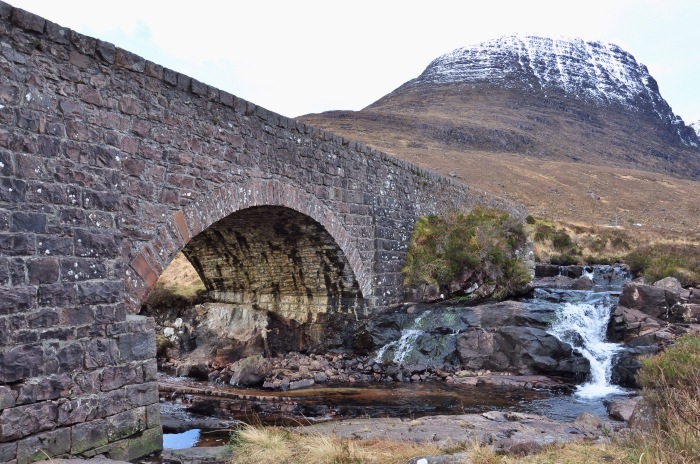 The bridge over the Russel Burn and the Sgurr a’ Chaorachain. The road passes over the bridge. (March 2016)

Bealach na Bà -in English, ‘the pass of the cattle’- is a historic pass that rises to 2,054 feet (626 metres), a single track road full of hairpin bends and with gradients that approach the 20%. Built in gravel in 1822 following the ancient track of the shepherds and only paved in the 1950s, it has been the only way to reach Applecross until 1970, when an alternative road through Shieldaig was completed. Until that year, during the winter, the road used to be closed because of the snow and Applecross became as isolated as an island, its only way in and out being by sea.

Once we reached the summit, we stopped at a parking area with a viewpoint. On a clear day, the views of the isle of Skye and the lesser islands between it and the mainland are simply stunning. The parking is also the point of start for an amazing walk that leads you to the summit of the Sgurr a’ Chaorachain. You will never have another chance to conquer a Corbett from such a vantage point.

Driving down the pass towards the west, the road emerges at the village of Applecross, a small community that the locals simply call The Street. If you follow the coast road further south, there are some charming settlements like Camusterrach and Ard-dhubh. The latter, placed on a spit of land can only be reached driving through a rollercoaster single-track road which is worth a while. But make sure your’re back in Applecross for lunch. The Applecross Inn is a marvel nobody should miss. I’m sure it’s not an overstatement to say it is one of the best pubs in the Highlands. The staff and the regular patrons are extremely welcoming and the seafood delicious. The battered haddock is a classic and among the best in Scotland. The scallops and the monkfish are excellent as well. The wine, malt whisky and Scottish gin menu is quite impressive.

The first time we visited the peninsula, we decided to go back to Lochcarron by the alternative road that goes from Applecros to Shieldaig. We feared the drive could be boring after the amazing morning, but it’s a wonderful coastal single-track road that goes through an almost lunar landscape. But to cross back the Bealach na Bà in the opposite direction is also an impressive and dizzy option. 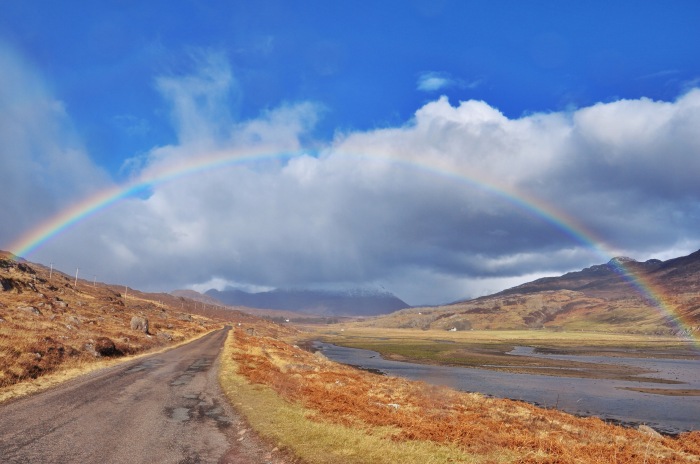 Photos by Hugo and Susana